Accompaniment: to walk with 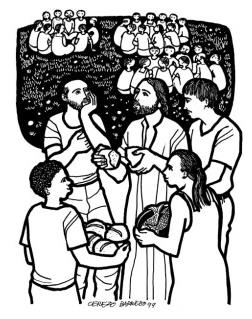 Let me begin with Matthew 14:13-21, the story that teaches us about feeding 5,000 people. The story comes immediately after Matthew provides the reader with the news that John the Baptist’s head had been placed on a platter and displayed at a fancy birthday party at King Herod’s palace. Essentially, the government killed the baptizer because he had become an inconvenience. John, let us remember, was the one who had greeted Jesus while both were still in the womb (Lk 1:39-55) and who had prepared Jesus’ way by baptizing him into his prophetic vocation (Mt 3:13-17).

Jesus, after hearing that he could be Herod’s next target, strategically withdraws in a boat to a deserted place alone. However, the gospel says that “when the crowds heard it, they followed him on foot from the towns” (Mt 14:13, NRSV). Jesus, not able to be alone because of the crowd, meets them at the shore and compassionately begins to heal the sick.

Although political assassination is the background to the story of the feeding of the 5000, the core of the story centers on a very practical concern: food. The disciples come to Jesus saying: “This is a deserted place, and the hour is now late; send the crowds away so that they may go into the villages and buy food for themselves” (Mt 14:15). While the disciples’ logic is reasonable, there is a lack of com/passion (suffering-with) in sending people away so that each one can purchase food for themselves.

Jesus responds to their logic with his own exacting vision: “They need not go away; you give them something to eat.”

The brief exchanges that follow between Jesus and his disciples leave much to be desired for understanding how resources were allocated for feeding the crowd, especially since the disciples only had five loaves of bread (and two fish). While on the one hand we can say that Jesus simply performed a miracle and multiplied the food, or on the other hand that people began to share what they already had with them and that it was more than enough, we really don’t know how they got organized so that “5000” could eat. At this level of analysis, the story of feeding the 5000 is a poor choice for answering the question: How Would Jesus Organize? However, my interest in the story is not because it provides a model for community organizing, but rather, because it reminds us of a crucial dimension of Jesus’ ministry: he fed people, he walked with people, and people walked with him.

In our ecclesial communities, it is not unusual to find a destructive dichotomy between charity and advocacy, or between direct service and community organizing. This tension can play itself out in various ways, but inevitably charity/direct service is considered religious or apolitical whereas community organizing/ advocacy is considered political. The former is seen as meeting only the immediate needs, while the latter is seen as addressing root causes. One is understood as more present-centered, while the other more future-oriented. Jesus, however, reconciled these tensions in his ministry of acompañamiento.

The etymological Latin root for the word acompañamiento (accompaniment) is “cum+panis” → “con+pan”→ “with+bread.” One’s companions are those with whom one shares one’s bread. In the gospel story of the feeding of the 5000, addressing the physical hunger of the crowds was fundamental, but beyond that, it was also the means through which Jesus and those with whom he broke bread became mutual companions.

Theologian Roberto Goizueta who has written about accompaniment makes the following point: “To accompany another person is to walk with him or her. It is, above all, by walking with others that we relate to them and love them….He adds: “The struggle for social justice will, in the long run, simply perpetuate the dehumanization of poor persons if not undertaken together with poor persons. Unless social transformation is rooted in an everyday accompaniment of the poor, that is, in the everyday act of walking with, living with, breaking bread with particular poor persons in the concreteness of poor persons’ everyday struggle for survival, the transformation of social structures will, in the long run, simply perpetuate the oppression of the poor.”

So, in response to the question How Would Jesus Organize?, I must answer by stressing that Jesus would become a companion—one who walks with an/other breaking bread together, and above all, with the hungry, the sick, the persecuted. Through accompaniment, Jesus provides the means for reconciling the (false) dichotomies of charity and advocacy, direct-service and community organizing. It is through direct acompañamiento (con pan) that organizing and advocacy bear the mark of the One whose liberative presence with the poor was already a threat to the social, religious, and political structures of his day.