CoE : Exchange of views between the President of the Conference of INGOs and the Ministers’ Deputies 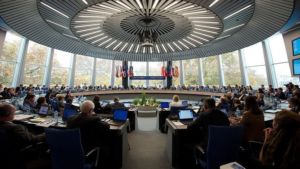 The President of the Conference of INGOs held her last exchange of views with the Ministers’ Deputies on 20 January 2021. Almost twenty Permanent Representations welcomed the reform carried out by the Conference of INGOs last December and made the link between this reform and the dynamics of the proposal that the Secretary General made to the Committee of Ministers concerning the implementation of the Helsinki decisions to open up the Committee of Ministers bodies to interaction with civil society and to increase NGO participation in the Council of Europe as a whole. The Deputies expressed their warmest congratulations in this regard to the Conference.

Among the many issues raised during the exchange of views:

The Chair of the Ministers’ Deputies closed the exchange of views by thanking the President for her commitment and openness during her six year mandate and underlined once again that NGOs were essential to the Council of Europe and the respect for democracy, human rights and the rule of law.