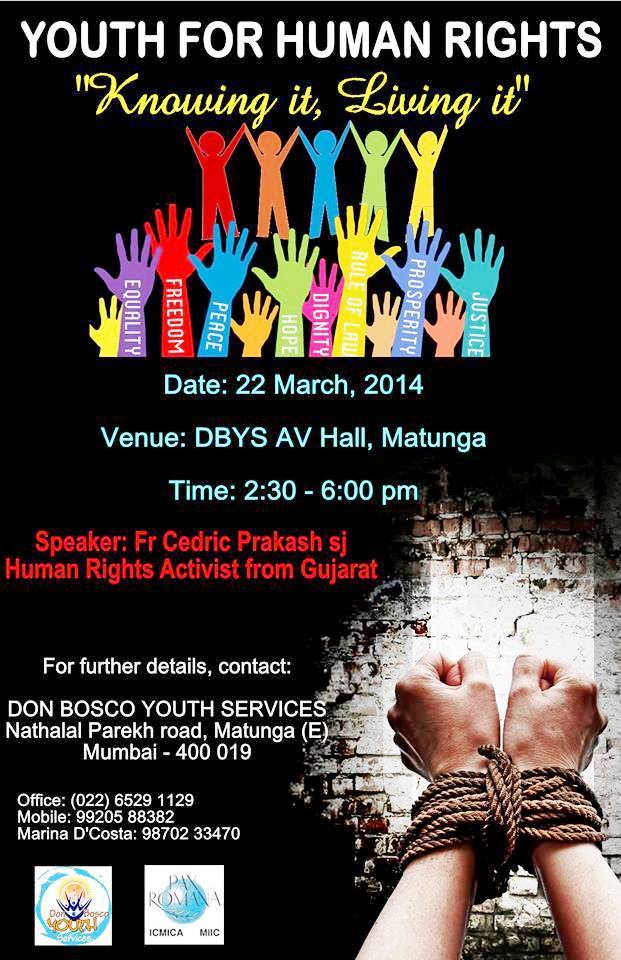 Being part of groups and movements is the best way to influence young people. That is the way I am moving right now with my movement building activities. Here below are few activities mentioned of Jan and Feb.

(Border of Gujarat and Maharastra). We met the Warli Indigenous people and were there with them for a day. It was a learning experience. What I felt was many youth have no base about the communities in India. It was very difficult for many to absorb the new things that they experienced in the community. I felt the need of giving them an introduction as to who are Indigenous People and how they live. How best we could learn from them and other reflections. Nevertheless, the day long exposure was enriching for many youth and they were open to learnings like this.

The youth of St. Dominic Savio, Wadala (E) made their way into the missions at Dadra and Nagar Haveli on 12th January 2014. It is the recent mission centre adopted by the Salesians of Mumbai Province where the Don Bosco Shelti Mission Centre runs a primary school, a parish and a boys hostel for the Warli Tribals. After reflecting on how to reach out to the needy this Christmas, the youth decided to help the missions. The youth group raised funds and also asked the parishoners for other articles that would be of use to the villagers. At Don Bosco Shelti it was a blessing to meet the parish youth, interact with villagers, celebrate the Eucharist in a lovely church which has the essence of a tribal culture, to know the life of Warli tribals, to interact with a professional warli artist who does warli paintings that depict the life of Warli’s and most of all to know a new way of life in one day.

It was also interesting to know how the church structure, the altar set-up and the faith of the community in the catholic church was so beautifully adapted in the Warli culture. For many of the youth this was the first kind of exposure to a tribal village. They realized that there was so much to learn and contribute in the missions. It was an eye opener. The youth have decided to venture more into the missions and make contributions in their own unique ways.

A special thanks to Fr. Augustine and Fr. Rickson for welcoming and helping the youth reflect on the life in the missions, the Warli Community for being generous and kind to them and making them feel at home. It was indeed a Mission Sunday for the youth of St. Dominic Savio, one of them rightly stated ‘we would encourage many youth to make their each Sunday a mission Sunday, the way we experienced at Don Bosco Shelti. A day spent at Shelti changed our attitude towards life and we look forward for many more…as we keeping shouting our slogan – “Back to the Missions- each Sunday is a Mission Sunday”.’

The Salesian Youth Movement Mumbai Province celebrated “Youth Fest” on the theme The Joy of Gospel. It was a great fest with loads of inputs on the Joy of the Gospel. I was given the opportunity to moderate the session on Joy of the Gospel conducted by Mr. Patrick Corda.

On the 26th of January 2014, the Salesian Youth Fest on the theme ‘The Joy of the Gospel’ was held at Don Bosco Matunga, followed by an outreach activity to Shelter DonBosco, Wadala. About 180 youth from Salesian communities belonging to the Mumbai province gathered in the school primary hall for a praise and worship session animated by Fr. McEnroe and his group of dynamic youth from Dominic Savio, Wadala.

The comperes for the day, Glen D’Souza and Hazel D’Souza introduced the chief guest, Fr. Edwin D’Souza, who addressed the gathering with words of wisdom. Fr. Edwin inaugurated the Youth Fest by lighting the lamp along with Fr. Baptist Monteiro, Patrick Corda and two youth. The SYM Theme song was performed by the DBYS Volunteers. The youth were then acknowledged for their participation and were divided into groups to know each other better. After new groups were formed and the participants started conversing with each other, Resurrection Parish, Virar presented the theme song. The theme song “Sing to the north and the south” set the tone for the input session, where the resource person Patrick Corda spoke on Pope Francis’ WYD message ‘I am God’s field’. Marina D’Costa, of the SYM Social and Political Group at DBYS, introduced Patrick to the crowd. Patrick spoke to the youth about being God’s field of faith. Through his testimony he spoke about vices, love for parents and self as well as self-transformation. He said change is personal, profitable but painful in order to change one needs to have a planned path and follow it. He encouraged the youth to spend quality time with their family and make scripture reading a part of their lives. He said ‘Youth are called to build the church and make a difference’. After the enlightening session, Bibiana Estibeiro, of the SYM spiritual group, presented the annual report of the SYM – DBYS activities for the year 2012-2013 she also spoke about the upcoming events and urged all present to be a part of them. After the annual report she familiarised the group with Shelter Don Bosco. She spoke to them about the institute its aims and shared success stories of some of the inmates.

It was then time for the solemn Eucharistic celebration. The main celebrant was Fr. Vinay Kamath from Our Lady of Salvation Parish, Dadar. In his homily, he spoke to the youth about making choices and paying heed to God’s call.

It was then time for the outreach; the youth were divided into groups as they proceeded to Shelter Don Bosco where they were greeted by Fr. Jesu and his team. The DBYS volunteers conducted action songs, games, and gave out spot prizes to the boys.

This workshop will soon be conducted for youth (Students and Young Professionals) – also arranging for Theatre of the Oppressed WADALA-MUMBAI, FEBRUARY 21, 2014: On 15th of February 2014, St. Dominic Savio (Wadala- E) and Our Lady of Dolours (Wadala – W) together organized atheatre workshop for the Altar Servers at Our Lady of Dolours Parish, Wadala (W).

The aim of the workshop was to help children understand the importance of dialogue through theatre and build their self confidence. The workshop was conducted by Ms. Marina D’Costa-Altar Server Co-ordinator of St. Dominic Savio , Wadala (E). The session brought out the essence of human beings as actors and spectators. Children were taught few theatre exercises, role plays, building characters for theatre, expressions of their imagination and the value of working together. The determination children worked with was, “Theatre is all about making things happen”.

Children shared their inputs on what components make theatre, how theatre can be effective and what they feel about being actors and spectators. Through role play they were guided towards acting in difficult circumstances. The clay act highlighted the role of the oppressor and the oppressed, where one acted as clay and other as the sculptor.

The most loved part of the session was dialogue through the medium of puppets, a conflicting situation was given and the context was explained. Children had to choose the puppets and dialogue to resolve conflicts. The session ended with a message that we all are actors in our own unique way and we alone have the ability to take action to make this world a better place.

AICUF Maharashtra celebrates 15 years of revival of AICUF in Mumbai.

It was a blessing meeting former IMCS Mumbai members and sharing our experiences to the present students in AICUF. I took this opportunity to speak a brief about Pax Romana ICMICA and also invited my friends who are professionals now to join the ICMICA movement. Lets hope for the best , some showed interest for the same.
Former AICUF members sharing their experiences.

1. Meeting with Jean Saldana – She is working at the Justice and Peace Commission . It was a good meeting discussing the works in Human Rights Happening in the Archdiocese of Mumbai. I have also spoken to her about training youth (Students and Young Professionals) in the area of Human Rights. We are planning that sometime soon.

2. Meeting in Gujarat- reviving ICMICA in Gujarat – members found Mr. Vipul Dhabi (L) and Mr. Rajnikant Gamit ( R )representing Dalit and Indigenous Community respectively, both have exposure to IMCS movement in India. We arrived at following action plans:
1. Applications of Theology (Asian Theology in Particular) and Catholic Social Teaching
2. Human Rights Training
3. Training in Advocacy
4. Networking and Movement Building
5. Training in Social Research and Documentation
We intend to find more young professionals who can support the movement and also build our rapport with the student movement to be resourceful to them.

3. Meeting with Fr. Cedric Prakash – Well known Human Rights Activits in India and also internationally. The outcome of the meeting was that an event will be organized on 22nd March in Mumbai on Youth for Human Rights. We are targeting as many youth possible all over Mumbai.

Movement Building is indeed a challenge but it is also a learning process. You may not find everyone who will be convinced to join the movement, but one must keep trying and ensure that we don’t ignore anyone, as they may turn out to be pioneers in the works to bring about a change in the society.