Pakistan is the 6th most populous country among 160 countries of the world. Pakistan is facing many problems like other Asian Countries in the world. It is a under developed country facing many social, political and economic issues. Religious extremism is the burning issue that we Pakistani are facing after 9/11.

There were a large number of blasphemous cases reported during the last decades.

(Three churches a convent, a missionary school, a girl’s hostel and pastoral house were burnt in Sangla hill). And many more…..

Due to this many people who has an access migrated and wish to migrate from the country for a healthier life style. But poor people who don’t have this access have to face all the discrimination at all levels.

To come up from all these Christians must have to involve in policy making (legislation) but unfortunately Christian youth don’t have enough opportunities for that. They do not have an access towards quality education. Our missionaries’ schools were run and headed by nuns. But they required a huge amount as tuition fees. Many school are restricted that they parents must have bachelor degree and English speaking. It makes a lot of hurdles for poor Pakistani Christians to get quality education and can compete with the Muslim majority.

Role of the Government:

The government of Pakistan always claims on national and international forums that Pakistani’s Christians are enjoying equal rights in Pakistan. Christians to be considered as second class citizen, I wish to bring on record that the social and economic situation of Christians is worst due to constitutional burdens.

There is no Christian secretary and Deputy secretary in Federal and Provincial governments.

There is No Justice in any High Courts of Pakistan.

When we view the education opportunities for youth in Pakistan in professional colleges and universities of Pakistan. It’s on Record that;

The doors of Medical colleges, Engineering Colleges and higher studies in Universities have been closed for Christian Youth by the admission policies of the government of Pakistan. The Christians youth is directed to contest on merit admission only. If in this modern world when Christians youth is blocked by the administration and it is difficult for one Christian youth to become Doctor and Engineer in Pakistan. How a community in such situation can be equal in economic and social fields.
Therefore 95% of Christians are forced to adopt the jobs of sanitary workers in Pakistan, which falls in lowest grade in Pay Scale of 4 in Pakistan when all the other pay scales jobs up to pay scale of 22 have the Muslims.

In 1985, when the Christian voters for the parliament introduced separate electorates to elect Christians representatives, the Christian’s youth enjoyed the jobs up to pay scale grade 11, on the quota of Christian representatives and it seemed that Christian youth shall be able to achieve goal of progress and equality. This was not liked by the government policy makers, which never liked that this Christian recruited on quota may reach up to grade 22 pay scales in Pakistan which is known as key posts in the administrations.

It’s very important to understand the fact behind the situation of the Christians in Pakistan? The clergy and the Christian tools of the government for their vested interests have never brought up the issue of article 41 of the constitution of Islamic republic of Pakistan, which put Christians in class second in society. It states that:

“[Chapter 1: The President] of [Part III: The Federation of Pakistan] PART III

The Federation of Pakistan

(1) There shall be a President of Pakistan who shall be the Head of State and shall represent the unity of the Republic.

(2) A person shall not be qualified for election as President unless he is a Muslim of not less than forty-five years of age and is qualified to be elected as member of the National Assembly”.

Minority as A female:

Women are 51% of the total population. Due to social and cultural obstacle she is involved in reproductive, productive and community work for 14-18 hours.  She is forced to bear child rather than helping society in developmental sector. There is no seriousness has been seen in girl child education. Parents mostly favor boy child education. Girl child education is considered as watering the other garden. Moreover many militants groups have blasted thousands of school because they are against women education. They have also given threats to several government and private schools.

Many schools are far away from the community pick and drop is the serious most issue a female faces in Pakistan. (Cultural Constraint).

I wrap up my discussion with these remarks that our country is facing many social, cultural and economic issues. Government has been unable to translate their words into action. If we want to compete the society we must perceive Education as a need for every human being on earth.

The Churas of Pakistan: Alienated in Their Own Homeland

Strange Culture we are living IN! 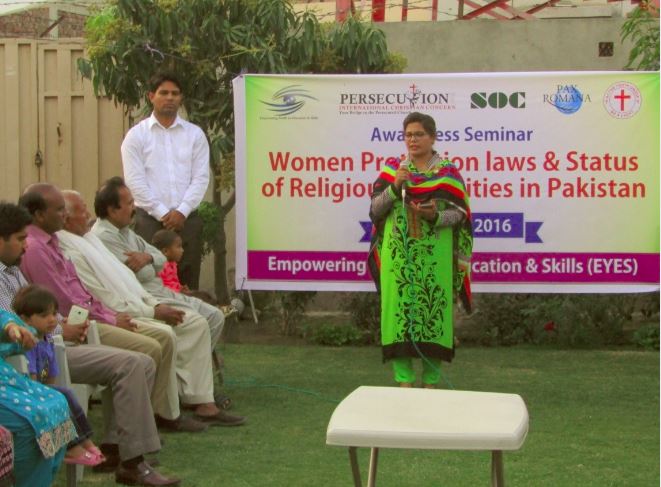