Our Rights Our Freedoms Always

Our Rights Our Freedoms Always

Active Youth Group, Woori Theological Institute and Pax Romana Pakistan jointly celebrated the International Human Rights Day in Pakistan on December 10, 2015 in Jinnah Public Library Hall, Sahiwal in which 50 students of different universities and colleges participated. The purpose of this event was to celebrate the human rights day and also create awareness among the youth of Pakistan about UDHR and its importance in our lives.

Different organizations representatives also took part in sharing session and where we evaluate the current scenario of human rights in Pakistan.

Mr. Ashik Naz Khokhar led this program where we describe the 30 articles of UDHR and present the documentary of history of human rights.

Human Rights Day is marked annually on 10 December to commemorate the day in 1948 when the United Nations adopted the Universal Declaration of Human Rights. A milestone document in the history of human rights, it sets out, for the first time, fundamental human rights to be universally protected.

Why do we observe Human Rights Day?

Fifty years ago, the United Nations General Assembly adopted two international treaties that would forever shape international human rights – but challenges still remain, and the documents are as relevant today as they were when they were created. 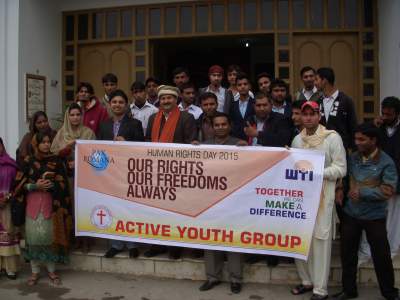 Many countries recognise human rights and the rule of law as the basis for fair and stable societies, but many states still have a lot to do to build political institutions, judicial systems and economics that allow ordinary people to live with dignity. Globally, many people are still unaware of the existence of the International Bill of Human Rights.