The national movements of Chile, Brazil, Colombia, Panama, Peru, Paraguay, Uruguay, as well as a guest from Argentina, met to review our commitments as professionals in the continent; the Dominican Republic, Haiti, Bolivia, Ecuador and Guatemala could not participate.

In continuity with the guidelines of the Lima 2015 meeting, guided by our methodology of revision of life, attentive to the present situation of our peoples and enlightened by the encyclical Laudato Sí, we assume the new challenges that we want to transmit through this document.

“Yes, I am going to create a new heaven and a new earth. […] The wolf and the lamb will graze together, the lion will eat straw like the ox and the serpent will feed on dust: No harm or ravages will be done in all my holy mountain, says the Lord”. (Is. 65, 17a. 25)

1- We reaffirm as a movement an understanding of development that is not reduced to economic growth, but that incorporates the multiple dimensions of human life, the quality of life of our peoples and the development of all people’s capabilities, which can be achieved even in conditions of insufficient income or the impact of economic crises, since the richest countries do not necessarily achieve greater human development.

2- We value the reduction of extreme poverty and the inclusion in the economic system of humble popular sectors, as well as the processes of socio-cultural integration of some minorities. However, this situation has not prevented inequality gaps from being maintained and, in some cases, from widening in several countries of the Region. The State, politics and democracy have not been able to modify the correlation of forces that allows the market, the large economic-financial corporations and other groups of concentrated power to consolidate the processes of accumulation of wealth and privileges for the few, to the detriment of the majorities and the Common House.

3- Democracy is the best way for our countries. However, people feel disenchantment and frustration in the face of democracy, which may incline them to the election of strong, “iron fist” governments. That is why it is necessary to strengthen it, which implies perfecting its functioning, so that money is not always the predominant factor in decisions, to improve political representation and to promote forms of participation that respond to people’s real needs and aspirations. In addition, we propose the creation of links of unity and networks with other social movements; promote the formation of new generations and enable them to have experiences of participation in collective actions; in this sense we value participation in movements that defend specific causes, and that arise at different times, as have been the movements of women (Not one less, Me too) or youth (as the “pulpines” in Peru against work with cut rights).

4- We have been challenged by the urgency of the situation of the Earth, our common home, due to climate change and global warming that demand an attitude of care and defense. In our subcontinent we have a special responsibility: the protection of the Amazon as a lung of the planet and a reserve of biodiversity, which is at serious risk due to the massive depredation of forest resources by illegal mining or by illegal crops for drug trafficking, or even legal crops such as oil palm, by the contamination of water and land by oil spills; all this threatens the lives of the peoples whlive there, and diminishes the oxygen that life needs all over the world. The Latin American church has created the REPAM (Pan Amazon Ecclesial Network) that brings together the nine countries that share the Amazon. We want to commit ourselves more and more in their work and participate in the preparation of the Pan-Amazonian Synod that Pope Francis has convoked for 2019.

There are also many other ecological problems in the diverse places of the continent that require our action: the contamination of the water of rivers and seas, of the air of the cities, of the blood of the populations with mercury, lead and other metals, the Guaraní aquifer, the careless handling of solid residues or of the mining tailings. Actions that seem small, such as promoting a culture of recycling, are very important, for example to reduce the use of plastic. All this calls us to a simple lifestyle, avoiding consumerism and sharing goods. We will seek links with the World Catholic Movement for Climate to articulate actions and have more impact.

“A true ecological approach always becomes a social one, which must integrate justice into discussions about the environment, to hear both the cry of the earth and the cry of the poor” (Laudato Sí, 49).

5- The preferential option for the poor, whose 50 years we have been celebrating since the CELAM Conference of Medellín 68, has motivated a long journey of profound experiences of dedication, witness and martyrdom, and continues to impel us to commit ourselves to the poor and to seek the concrete faces that challenge us today. We find the faces of women who demand equal participation in society, in politics and in the church; the faces of women who are victims of violence, especially feminicide; the faces of children and young people who suffer sexual abuse, mistreatment or abandonment; the faces of migrants who escape from inhuman living conditions and run the risks that this entails; The faces of those discriminated against because of their ethnic origin (indigenous and African American), socio-economic status or sexual orientation; The faces of young people who do not find decent employment or opportunities to study; The faces of older adults who do not receive decent pensions or are victims of the culture of discard. We want to serve them with our professional, political or social work.

6- We feel part of the Church in which we have received the message of the Gospel and teachings to grow in faith and deepen our sense of life. We live with Francis a moment of hope and a return to the essence of Jesus’ message, which calls us to build a “poor Church and for the poor”, “on the way out”, and to incarnate the council as Medellín did. We are shaken by a very deep crisis caused by the sexual abuse of children and adolescents by ecclesiastical personnel and the concealment of the problem by the hierarchy. In the midst of pain and indignation, we see these events as a sign of the times through which God calls us. Victims must be the priority, they must be heard, cared for and receive the necessary reparation that is justice. Our communities are in solidarity with them. With Pope Francis we point out that the deep cause of these crimes is clericalism, the spirituality of the elite and the abuse of power. This requires a profound change in the structure of our Church and a sincere conversion; only in this way can it regain credibility. These times are a kairos, an opportune moment for change, for the protagonism of the laity and in particular of women, to build a more synodal church.

7- The ICMICA of Latin America is a community of followers of Jesus, who constantly review their life and commitment in the light of faith. We consider it necessary to reinforce our spirituality, deepening our methodology of reviewing facts of life, updating our theological reflection. We want this modest movement, which has marked our lives so much, to grow and be strengthened, integrating younger generations and supporting Catholic student movements in our countries. We appreciate and appreciate the work of the Regional Team and the accompaniment of our advisors (priests and laity).

These guidelines should be concretized in action plans pertinent to the reality of our countries and according to regional perspectives and possibilities. 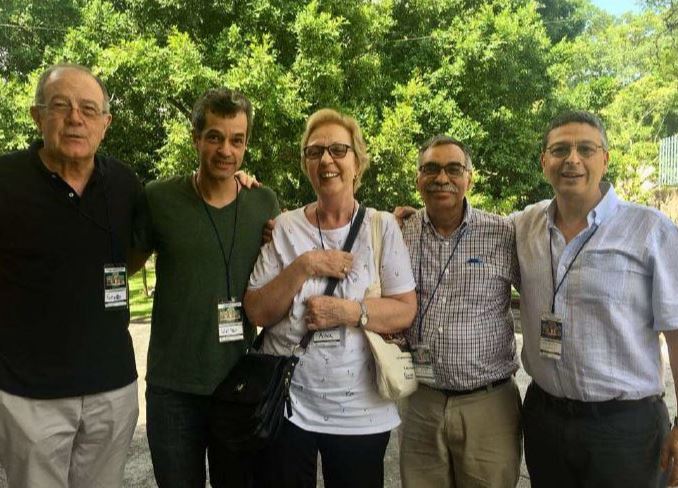 El Salvador For one part of Central America

A critical look at the challenges of Latin America