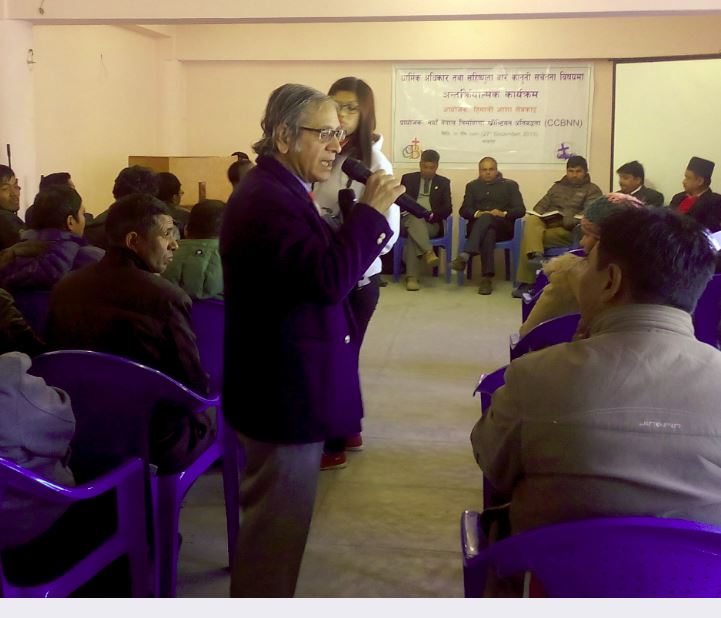 There has been series of discussion over Nepalese constitution and freedom of religion or belief. Religious leaders, media personal, legal workers, human rights activist has been constantly expressing concerns over controversial explanations of Nepalese secularism.

It has been over a year, team of inter religious groups that includes major religious groups, Hindu, Muslim, Shikh, Bahai, Buddhist and Christian is not only limited within Nepal to spread message about religious freedom via main stream and social medias, also been to Geneva and actively participated in international advocacies at United Nations and Diplomatic Missions.

An interaction program on Legal Provision about Religious Rights and Tolerance by Christian Commitment for Building New Nepal (CCBNN) in Bhaktapur yesterday. Concerns has been raised over the narrow definition on Secularism at article 4 of Nepalese Constitution, which is confusing normal public to understand.

Minority religious leaders are worried that secularism as it clarified is not right and not authentic, they also afraid that even Supreme Court cannot define exactly if we go through the some of the verdicts done by it in the past. In addition, Nepalese constitution at its article 26 is indirectly restrict freedom of religion. Provisions in article 26 has brought serious doubt wagging around. Practically religious minorities are facing various problems already and this article is no good to address them yet.

Atorney at Law, supreme court Nepal, Rudhra Sharma analyzes that the freedom of religion ensured by constitution, if literally reflected, this could create religious intolerance, people has right to interpret at their understanding however; letter, spirit and scope of those provisions should be considered carefully, he said.

Not long ago, Nepalese Churches were limited within Church boundaries. Of course, Churches too had been praying [contemplative] for good constitution for long time, but recently Nepal being reviewed at United Nations’ Human Rights Council [Universal Periodic Review (UPR) -November 2015], Geneve has brought inspiration to involve in human rights issues with the support of Pax-Romana and World Evangelical Alliance (WEA).

Tanka Subedi, a local Pastor is one among them who has been involving tirelessly in human rights issues, thanks to Pax-Romana and WEA helping us to understand issue of religious freedom along with other human rights issues- Subedi acknowledged.  Articles 18 of both Universal Declaration of Human Rights and International Conventions on Civil Political Rights are not fully legitimated in Nepalese Constitution by criminalizing conversion- he said.

Constitutionalize of secularism was not easy task as there had been high demand of Hindu Kingdom as a hidden sentiments of most of the political leaders. Even after introducing a word “Secular”, constitution do not guarantees religious freedom, it rather creates more confusion among majority and minority religious groups.

Lokmani Dhakal, a member of Nepalese parliament confirmed that there was high influence not to have secularism; maximum discussion inside the parliament were about sustaining Hindu Nation literally.  Dhakal represents Janajagaran Party that composed of Christian faithful.

“Current political problem is all about because of secularism, words are twisted and by heart, constitution is still pro Hindu”- he said, “we did not go hard, we embraced humility and prevent further damages, at the time when there were already attacks in Churches were started”.

Dhakal hoped for a day in the future, when people will be aware about true meaning of the secularism, which is good for everyone.

“However, we have a good constitution, secularism [it is better than nothing] is welcomed and I had privileged to sing on it as a member of constitution assembly”- he said.