Sharing and Receiving: Interfaith Experience of A Youth

Whenever I attended an interfaith event I was always amused to see the religious leaders advocate about their own faith and find common grounds to build solidarity. However, a student I was always the recipient only having scope to ask questions or share my opinions. There was always a question on my mind as to how youth from various religious backgrounds who are not scholars in scriptures would respond to the call of interfaith dialogue. As Gandhi said, “Be the change you want to see”, I determined to create this opportunity with few individuals who are likeminded and are working closely in the area of interfaith dialogue.

I woke up each morning hearing “Allaahu Akbar”, the Fajr call to prayer. At the same time I heard the church bell ring for Angelus. I am born and brought up in a place where I have Muslim, Catholic and Hindu neighbours. I have a mosque, a church and a temple close to my house. My mother was practically brought up in a Hindu Punjabi family and my father’s elder sister is married to a Shia Muslim who stays in my lane. Thus, from my childhood I was part of this interreligious environment, which I found very healthy for my personal and social growth. This also led me to take interest in various religions and culture of the world. 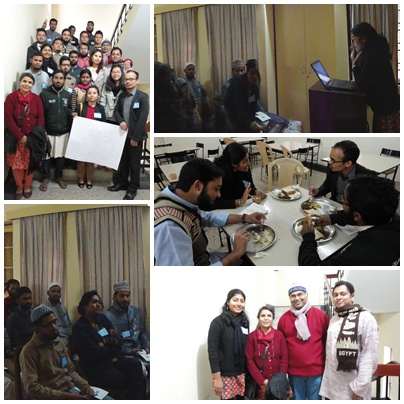 Family is the base for one’s religious beliefs to thrive, as I was growing up besides knowing about Catholic faith, I also grew up knowing about Hinduism and Islam or rather knowing people who belonged to that faith who mattered to me. The acceptance of my Aunt’s family for ‘dua’ at the end of the fast, and saying Bismillah together and then enjoying the Iftar meal meant a lot to me and my younger brother. My aunt’s husband giving us Eidi on Eid made us feel on top of the world. We bought new clothes on Eid to feel one with our neighbours. Likewise, being one of the kanchak’s for Navratri’s Kanchak Puja and attending lakshmi Puja on Diwali was something that opened my heart and mind to understanding faith. The same response was from them to our Christmas celebrations and other religious spaces. Being a student of Indian Sociology, Ancient Indian Culture & Anthropology added value to my knowledge of culture and religion. Also enrolling in basic course for Islam studies and Buddhist teachings has broadened my worldview. Today, when I recollect I know it was faith beyond religion that I shared, and this faith was my faith in humanity which was built along with people with whom I shared my life. I thank my parents for never being a barrier to my interest in interfaith dialogue. It is only because of these positive experiences, today, I can connect to the power of interfaith dialogue. 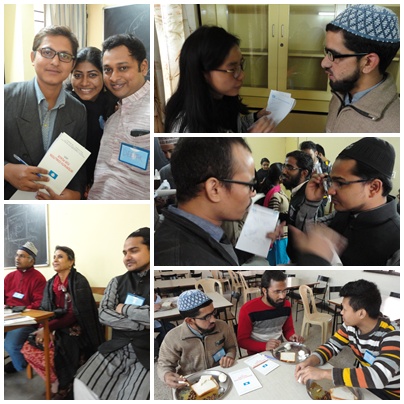 Sharing and Receiving is a very basic process for dialogue in any context. Dialogue has its core in sharing heart to heart where people are moved and inspired. On the other hand the one who receives this message needs to open his/her heart to feel what the other person is feeling i.e. to see the point of view of the other person. This makes dialogue effective and human relationships are born. The interfaith event was all about sharing and receiving. There was an immense sense of belonging in this event. I learnt that when we bring people on a common platform and help them express themselves, it leads to one’s transformation. 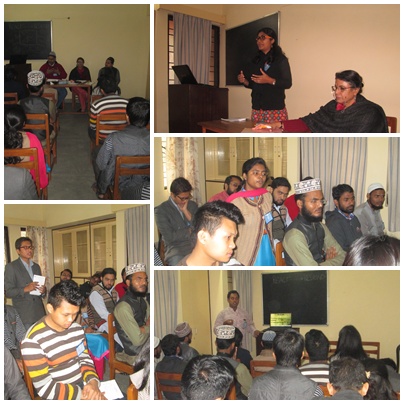 The essence of Dialogue

Culture is a way of life, which is influenced by one’s world view, environment, upbringing and the existence of a culture itself. It guides us at each stage of life, helping us make choices and decisions. One area of culture that youth need to understand is, “the culture of dialogue”. The power of dialogue has immense potential to deepen the understanding on self and humanity. Culture is nothing but a way of life, and thus the way youth live becomes a youth culture in itself. Our society in the recent past has become complex, building scope for misunderstanding and conflicts to thrive; in such a scenario having the wisdom to dialogue is imperative. The five important aspects for dialogue given by scholars are: self, worldview, thoughts, words and actions. It is a process that needs to be followed which eventually with practice gets better. Youth were made to reflect on these aspects and self introspection was done. A common understanding of what truly dialogue is was achieved with the active response of the participants. 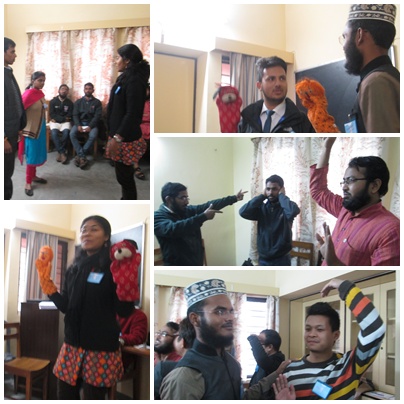 We often make statements on different religious groups based on our experiences we have with people belonging to that religion. It is unfortunate that we have not added intelligence to our thought process to understand the difference between religion and the people who practice that religion. It is important to understand the difference between what is religion and what is being people belonging to that religion. However, it is not fair in any case to justify one based on the other. They are two different entities, having influence on each other in different circumstances .

The unfortunate part of foolish people is their level of confidence. We often make stories and make other believe it is true. We have no rationale to the statements we make. So when we hear these stories are we reacting or responding? If we start responding we will be peace makers. Media is instigating so many ideas, are we generalizing or being specific. It is all about taking a stand for humanity and responding to situations that really need assessment.

It was an experience one cannot forget. A genuine human who cares about his fellow human beings will connect to this Genesis of Human Rights. It flows so naturally in all of us, we just fail to tap the potential we have to transform this world. Human Rights is a platform where all stand equal and see the world through one common lens. This discussion was dynamic and fruitful, as many encountered the Universal Declaration of Human Rights and its history for the first time. This developed a strong foundation to be solidarity with each other and understand the real purpose for interfaith dialogue.

Theatre of the Oppressed is a theoretical framework and set of techniques developed by Brazilian director, artist and activist Augusto Boal. Recognizing that humans have a unique ability to take action in the world while simultaneously observing themselves in action. Boal believed that the human was a self-contained theatre, actor and spectator in one. Because we can observe ourselves in action, we can amend, adjust and alter our actions to have different impact and to change our world. This idea of Augusto was applied for theatre session which was full of fun and self expression. Participants were thrilled to explore the expression hidden within them and to observe critically each and every exercise, participating and reflecting at the same time.

It is not often the mouth, but heart that speaks. The experiences shared moved each one of us. It was a feeling of gratitude and a declaration of awakening one’s self consciousness. It is only through sharing that we receive and can in return share to many. Truly sharing and receiving weekend did achieve its goal.