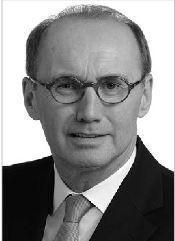 We live in turbulent times: Financial and economic crisis, Brexit, migration and refugee flows, globalisation of the economy and a worrying waiting trend for populist movements accompany us. The question is obvious: Is European democracy in danger? But there is no simple answer to this question. Extreme positions and one-sided considerations do not lead to anything. Only in a broad and objective discourse can we meet the challenges ahead, survive the changes of time and safeguard European democracy.

A good example is the biggest economic, financial and sovereign debt crisis since hundred years, which we are just leaving behind more and more. The biggest problem of crisis management in 2007 and 2008 was that the euro is the only currency in the world that still has no national territory, no common budget policy and no common economic policy. But with this reality it was apparently intended to spare the people of Europe for a long time. It was not until the crisis that it had to be made clear that the “lack of Europe” and failures to develop the EU into a monetary, economic and social union were the main causes of Europe’s inability to act.

Today we have taken a big step forward. The European Union has learned the lessons of the crisis with more than 50 legal acts to ensure the stability, confidence and resilience of financial markets. Strict capital requirements for banks, regulatory and settlement rules, the capping of bankers’ bonuses and numerous other measures have been introduced. But we are not there yet. We must continue to learn the lessons of the crisis and transpose the inter-State transitional solutions decided at their peak into European Community law. And we must complete economic and monetary union.

Brexit is a good example of the threat to democratic principles. Brexit is not only a consequence of the UK’s wage and debt policy. Rather, it is a consequence of the dishonesty of politics towards the citizens. The Brexit proponents have unscrupulously spread untruths and deliberately misled the people. Not a single promise of Brexit’s supporters to the people can be honoured today or in the future. On the contrary, all concerned will suffer damage, Britain even more so than the EU. This is what happens when, for party tactical and national egoistic reasons, you play with the concerns and fears of the citizens. Unfortunately, the misleadings in the course of the Brexit campaigns are not an isolated case, but a problem of democracy policy, which is increasingly becoming apparent in Europe. Politicians such as Jaroslaw Kaczynski and Viktor Orbân use neo-nationalism and increasingly authoritarian systems to campaign for votes. The rule of law, democracy and the separation of powers must be a matter of course for every EU Member State. But the occupation of the Hochstrichter in Poland unfortunately paints a different picture. The Polish government must raise no doubts about the rule of law by the end of March. Otherwise, EU Member States are required to pursue the sanctions procedure under Article 7 of the Lisbon Treaty for serious and persistent violations of the rule of law. The European Parliament has already adopted its decision on this.

That is not yet the case with the Hungarian Government. But even Prime Minister Viktor Orban’s repeated public opinion polls are in reality not an expression of democracy, but pure motivational power. If one tries to discredit democratic EU decisions, which have come about with Hungarian rescue, by means of national citizen surveys, then one says goodbye to European co-responsibility. It reinforces nationalism and plays the very double game that ultimately led to a majority of citizens voting for the Brexit in Great Britain.

These worrying trends are accompanied by restrictions on the freedom of the media and independence of journalists. The murders of journalist Daphne Caruana Galizia in Malta and her colleague Jan Kuciak in Slovakia are tragic examples. These unscrupulous crimes must be solved meticulously. They show how deep the swamp of money laundering, corruption and tax evasion is and how huge the need for action is. The biggest problems in the fight against tax evasion and money laundering are the lack of European and international cooperation, the disunity and selfishness of some Member States and the lack of a common European tax policy. Once again, we have too many tax heavens and too few opportunities to act because of too little Europe. The fact that an individual Member State can veto a case slows down necessary development steps again and again. We therefore need a change in decision-making procedures with majority voting among EU Member States and a move away from unanimity in European tax policy.

All these developments show: When it comes to necessary reforms and changes in Europe, politics fails to explain Europe and instead plays the national card. For example, the European Union still has far too little scope for action to make globalisation effective and to deal with crises. The community of law and values, democracy and an open society are often in danger due to the difficult handling of the problems. A “yes/no democracy”, nationalism, populism and the inadmissible simplifications of complex contexts cannot be the answer. There must therefore be a clear state of affairs between the European and national levels as regards democratic legitimacy, control and decisions. Subsidiarity is not a one-way street and does not mean “either or”, but means “effective division of tasks”. We must tackle the work on the many construction sites, deal honestly and objectively with the challenges of our time and let the people participate in detail. Without a broad political and public debate on this, the danger for European democracy is growing.