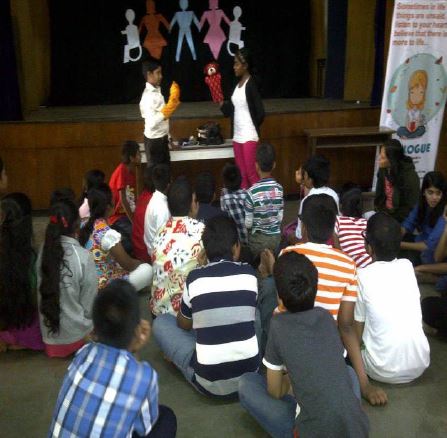 Recognizing that humans have a unique ability to take action in the world while simultaneously observing themselves in action, August Boal, the famous Brazilian director, artist and activist who introduced Theatre of the Oppressed, believed that the human was a self-contained theatre, actor and spectator in one. Because we can observe ourselves in action, we can amend, adjust and alter our actions to have different impact and to change our world.

Effective dialogue is an important component of theatre; here all the actors on stage need to be at the same level for true dialogue to happen. Theatre exercises ensure that one achieves this goal of sharing the same frequency and is listening to the other person, not only through words, sound, but also from one’s gestures. This is so essential for dialogue. I was exposed to theatre couple of times at different stages of life, being a participant and expressing myself. Back then, I considered it as a matter of acting or mere drama, but slowly when I was aware of theatre as a unique form of art, I was keen to do more of it. Especially, being pro human rights, Theatre of the Oppressed (TO) was indeed a tool for reflection and reaction. No doubt that I always enjoyed acting and being part of musicals where light. sound, dance, singing got me thrilled. I called it creating a world of my own. Where you had the freedom to bring alive an abstract concept or emotion which words could not express. I remember as a student doing mimes with my team every evening at a rural exposure camp in Tamil Nadu (a state in India), expressing the pain of the marginalized communities. Unconsciously, those mimes are still fresh in my mind. The exercises of passing energy and paying attention to the other person, especially the scenario on stage was something that built self awareness and exposure to real situations. As they say, you always meet your unfulfilled desires down the road. Something mystic happened for me for Dialogue through Theatre.

One day after work I met a priest friend of mine, who always insisted to come over to his shelter home for boys and conduct some activities for them. I always found excuses for not making to be with the boys. Our conversation progressed as we walked towards the bus stop. Just few days prior to this conversation, I was reflecting on Theatre and it was mystic that without any preparation I happened to tell him, “I can conduct a Theatre workshop, Dialogue through Theatre”. Here, I got an opportunity to explore more of theatre for those boys who were in anticipation for learning something new. Being good at acting, directing small plays and having a sense of theatre, getting into the shoes of conducting a theatre workshop was not that difficult. What was more needed was to research and know more about the essence of theatre itself. As I began my research I realized that Theatre was one of the best platforms to help individuals express themselves and overcome guilt, helping them open up and do role play, thereby, making them accept the situations of life. I recalled the words of Paulo Freire, “I engage in dialogue because I recognize the social and not merely the individualistic character of the process of knowing. In this sense, dialogue presents itself as an indispensable component of the process of both learning and knowing”. There couldn’t have been an opportunity like this. As I deepened my reflections on bridging Dialogue and Theatre, I found new venues to use Theatre to Dialogue.

My workshop began with these words, “Theatre is all about making things happen”. Children were asked to work with this goal and be supportive towards each other, respecting one’s individuality. The session brought out the essence of human beings as actors and spectators. Children were taught few theatre exercises, role plays, building characters for theatre, expressions of their imagination and the value of working together. They shared their inputs on what components make theatre, how theatre can be effective and what they feel about being actors and spectators. Through role play they were guided towards taking action in difficult circumstances. The image theatre highlighted the role of the oppressor and the oppressed, where one acted as clay and other as the sculptor. The most loved part of the workshop was dialogue through the medium of puppets, a conflicting situation was given and the context was explained. There were two puppets, the first one being the puppet in conflict and the other one using the tool of dialogue to resolve the conflict. Children had to choose the puppets and dialogue with their own wisdom to resolve conflicts. The session ended with a message that we all are actors in our own unique ways and we alone have the ability to take action to make this world a better place.

I never thought of encountering theatre in this manner. Theatre for me was always a platform shared by elite actors and personalities, or was simple as local dramas. I felt to be certified as part of theatre, one had to undergo rigorous theatre classes and performances. I never saw theatre as something that can be so powerful to convey strong messages for social change. Not knowing that one could conduct these simple exercises that were so powerful for social change. Theatre is so close to realities of life and dialogue through theatre is encountering those realities and challenging one’s self to overcome guilt and resolve conflicts. It is a healing process. I encourage many to know more about theatre, it is true that we may not be experts in theatre perhaps acting, but we certainly are sure of the cause for dialogue. If you think you are not yet convinced that you can conduct a theatre workshop, I suggest to dialogue to know more about the beauty of, “Dialogue through Theatre”.